Home Events Hell of the North-East – done and dusted

Hell of the North-East – done and dusted

Saturday morning at early o’clock and there’s a hardy bunch of cyclists waiting to be let in to The Hub to get a speedy caffeine fix. There’s an air of excitement and slight trepidation as they’re all signed up to tackle the inaugural run of The Cycle Hub’s Enfer du Nord-Est.

Before coming to work in Newcastle, I was lucky enough to live only 3 hours drive away from Northern France and Belgium and had on occasions ‘popped’ over there on a Friday night with a small bunch of mad friends to tackle some of the infamous sections of pavé (cobbles) that can be found in the area.

Now transplanted to the north-east and with Spring rapidly approaching I was getting slightly depressed at the thought of not getting my regular fix of being battered by cobbles and shaken by rutted farm tracks. This might sound pretty mad to most people, but once you’ve experienced the thrill of hammering your way along a track that was patently not designed to be ridden on a road bike, it’s impossible to get rid of the addiction!

The problem is that although Newcastle is a fantastically good city with so many positive points about it, it was just too far from my beloved flat-lands of northern-Europe. Not so much a short hop across the channel, as days and days of motorway slog or swopping a kidney for an overnight ferry ticket. So, if I couldn’t get to the cobbles, I’d have to bring them to me….

A few weeks later and I was spending every spare minute with O.S. maps spread all over the sitting room floor, pouring over google earth images and riding rutted farm tracks trying to work out whether they would be feasible on a road-bike on the first weekend in April.

Why the first weekend in April, you may be asking? Because that was the weekend that the real Enfer du Nord (the Hell of the North) race is run. The world’s best road racers tackling nearly 300Kms of broken tarmac, vast sections of eyeball rattling pavé and miles and miles of rutted, lumpy, treacherous farm track. Although it must be absolute hell to actually race in, the event makes incredible viewing, whether from the roadside or from the seat of a local bar and I wanted part of it.

After plenty of hours of meticulous research and lots of riding inappropriate routes (including one reccie ride in the pouring rain, where after 5 hours of riding I was so frozen and exhausted that I slumped on the door mat once I got home and then sat shivering on the sofa, much to the consternation of my girlfriend!) I had the perfect route sorted out. 100 Kms of pavé, farm tracks, broken tarmac, cycle paths and bridleways, all topped off with a celebratory lap of the City Stadium (the closest we had to the Roubaix Velodrome).

All I needed to do then was make a promo film, get some customers interested, plan the logistics, warn the cafe of our arrival, find assistant guides, complete a risk assessment, get the bike prepped and design the top tube route stickers…..How hard could that possibly be!

Luckily on the day of the ride itself, it all ran according to plan, the group were fantastic – all slightly bonkers (you have to be, to willingly choose to ride a road bike on what are essentially off-road trails) but all up for a challenge, the route worked perfectly, the lunchtime cafe had a table ready for us and even the rain held off. OK, so we had a few punctures and I suspect there might have been some achey shoulders and tired legs the following day, but isn’t that always a sign of a good day out on the bike?

If you’d like to see the images from this year’s ride have a look here and if you’d like to be kept informed about future guides rides from The Hub ( Saddle Skedaddle’s home / café / bike hire place), then keep an eye on our news page, calendar and twitter feed.

Hope to see you next year?

The Saddle Skedaddle ambassador of pavé 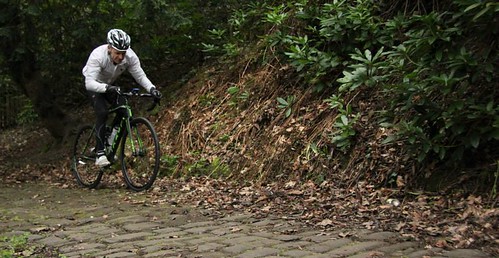 My favourite ride: the Sea to Sea

The Story Behind: Way of The Roses

My Skedaddle Story: Cycling LEJOG in 2020

The Story Behind: Hebridean Explorer, Scotland

Our expert’s guide to the Lake District

14 best British cycling rides, according to you

Travel with the seasons! Our guide to 2021