Home DestinationsEuropeUKC2C / Sea to Sea My favourite ride: the Sea to Sea

My favourite ride: the Sea to Sea

This year is the 20th anniversary of the Sea to Sea (C2C), a 140-mile route from Whitehaven or Workington to Tynemouth or Sunderland, through some of the most beautiful countryside in the UK. To celebrate we have teamed up with Sustrans, to organise a three-day ride in May. Colin Hacker signed up for the same challenge ride in 2012, and completed the journey in three days with 20 other cyclists. It was his longest distance yet… 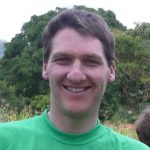 I signed up on a whim – I’d completed the Devon Coast to Coast a few months earlier, and when Sustrans’ email came through advertising the C2C ride, I booked! I didn’t know anyone else taking part, but I was sure I’d have a great time. I was to take on a longer distance ride later in the summer so this was a great chance to get used to being in the saddle for three days in a row. The scenery is definitely the highlight – it’s stunning. By the end of day one we’d already decided that cycling is the only way to see it and take it all in. The two very best views were on the way out of Kendal on day one, and as we reached the top of the Northumberland peaks on day two. We were in the middle of nowhere, with nobody around but our group of cyclists. Bliss.

We got the chance to do some off-roading too. As we emerged from the Whinlatter Pass, many of the group headed on-road into Penrith, while some of us chose the off- road option which took us through Whinlatter Forest. Bombing around was loads of fun, and we think it shaved off a quarter of a mile!

Saddle Skedaddle did an amazing job of supporting all the riders. The beauty is that they give you maps, and landmarks to look out for to make sure that you’re on the right course, but essentially you can do each day’s ride at your own pace. They always made sure there was plenty of good food to go round too, including cake!

Highlights
• passing near the sacred Castlerigg stone
circle, a Bronze Age meeting place
• Greystoke Castle, on which the legend of
Tarzan is based
• the highest café in England at Hartside
•the old lead mining village of Nenthead
•the Baltic Arts Centre in Gateshead.

The structure of the ride is perfect – day two is certainly the most challenging, with quite a few steep hills, especially the one up to Hartside. That said, the ages of people in the group varied greatly, so I think as long as you have a fairly good level of fitness this route will be perfect. And once the hard work is done, you can be rewarded with a much easier third day. The final stretch from Hartside to Newcastle was a treat – downhill for much of the way to our end point!

One of the best parts of the ride was the company. It’s great to just book without knowing anyone else. That way you see some amazing scenery, get some brilliant fresh air, meet different people and characters, and spend some quality time chatting with like-minded cyclists. Perfect!

Fancy taking on this iconic route? Why not join our special anniversary ride! It’s happening from 24 to 26 May. We’ll be fundraising to keep this route in tip-top condition for the future. All riders will receive a 20th anniversary pack including a certificate and an exclusive C2C maquette of one of the many artworks on the route.

Thanks to Sustrans for this lovely article on the route, to see the original copy of this article click here

Our Pick of Spanish Road Cycling

7 Reasons to ride your bike in wonderful...

8 reasons why you will love cycling in...

The Story Behind: Way of The Roses