Cycling enthusiast Richard Caseby from the Sunday Times joined our Corsica – The Beautiful Isle road cycling holiday and below is his write-up. For the full itinerary  of this  trip – click here

Flying down a hill through the chestnut groves of the Castagniccia, I glanced up to see a herd of pigs truffling about in the middle of the road. The lead sow lifted her sullen black head, and stopped chewing. It was hard to say who was more surprised, her or me. It was too late to brake, so I picked a line through the hogs. They scrambled out of my path, squealing into ditches or tossing themselves headlong over the edge of the road into a crevasse. As the yelps faded behind me, so did the pang of guilt. These were not the famous Corsican wild boar  – you’d be lucky to spot one in daylight  – but rather a handful of the 45,000 feral pigs that graze the interior forests and eventually end up as the island’s charcuterie, making guest appearances in lonzu (a smoked pork fillet), prisuttu (cured ham) and panzetta (like streaky bacon). They’re certainly much safer on the plate. 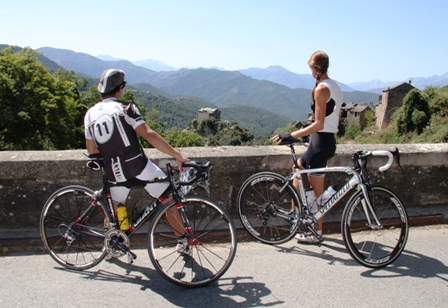 Such is the unexpected charm of Corsica. A beautifully rugged destination for road cycling, it guarantees a surprise round every corner. Usually that’s a splash of wild flowers or a coastal panorama, but it can just as easily be a local delicacy staring you down or, worst of all, a scattering of foot-deep potholes on a fast descent. And that really is scary.Corsica  might not initially be  an obvious destination for road cyclists who are more likely to prefer the classic cols of the French mainland. But more than two thirds of the island is mountainous (20 peaks over 2,000 metres) and it has some of the most drop-dead beautiful coastal routes in Europe.

I guess this is the nearest you can get to a glimpse of what coastal Provence was like before the second world war: empty, largely undeveloped and lush. It certainly fills the senses. The spring surge is so powerful, wild flowers burst through cracks in the tarmac; and the maquis, the dense undergrowth, is thick with rosemary that sprouts everywhere, erupting with scent whenever you grasp a handful. No wonder Napoleon said he could smell it even in exile.

The island has always been popular with the French and Italians in peak season, and elderly British hikers in spring. But with EasyJet www.easyjet.com operating direct flights from  London Gatwick (LGW)  to Bastia  – though you can fly via Paris with Air France or to Nice and the catch the ferry to Bastia, it’s opening up to the lazier end of the market.

I spent a week touring the island with Saddle Skedaddle, a cycle-holiday specialist. The organisers grade each trip from easy (beginners covering 60km a day on rolling roads) through to moderate (70km-90km with a climb or two most days) and ­demanding (80km-120km a day on mountainous terrain).

The Corsica trip  –  (7 days) includes five days of cycling that explore the northern region, with bags delivered to the hotel each night by support van  – was described as moderate and well within the capabilities of any reasonably fit weekend road cyclist.

My group of a dozen or so, aged 30-50, included a Scottish postman, a facial surgeon, the owner of a soft-drinks firm and a forensic accountant on a year out. As soon as I arrived, I tossed our tour leader, David, a curve ball  – a tiny grub screw had fallen out of my rear brake, rendering the bike unrideable. 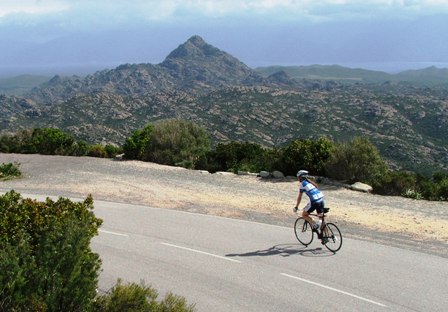 He was immediately on the case, providing me with a replacement bike (a perfect fit) for the first day and ensuring my own was fully repaired and delivered to the hotel for the second day.

On the first day, we kicked off from our hotel in Bastia to ride round the Cap Corse, the northern peninsula. It’s an easy loop and a great ­introduction to what the island has to offer  – row upon row of rocky bays, washed with a lava of yellow-studded broom and pink rockrose. The scent was overwhelming and rolled towards us in waves.

We pitied the folk trapped in the air-conditioned tour buses that overtook us on the few straight stretches. Oh, the self-righteous delight  – it’s almost as invigorating as the scenery. Anthony laid out a roadside picnic on a cliff, and later we made a muzzy descent to our next hotel in St Florent, a chic little marina fringed with restaurants. 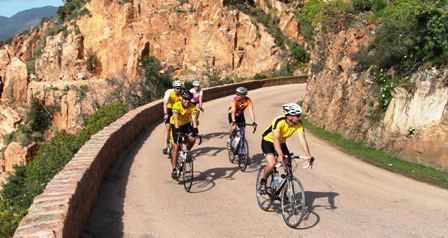 The route from St Florent to Calvi took us over the DÃ©sert des Agriates, a 100km block of rocky moonscape that was once a breadbasket of the island. Soil erosion and fires have left a blasted landscape and now the only signs of fertility are tree nets, slung like bras under the olive groves to catch the falling crop. After an ice-cold Coke at the village of Cateri, three of us threw together an untidy paceline, taking turns at the front as we hurtled down to Calvi, a garrison town still populated by the French Foreign Legion. Never pick a fight with anyone in a bar who looks like a hard, tanned whippet. You’ll lose.

Still to come was the route to Porto from Calvi ” one of the most beautiful coastal rides in Europe, weaving gently in and out of coves as your head grows dozy with the smell of wild fennel, blooming all around. By the time we dropped down into Galeria, a little off course, I felt slightly drunk. When we turned inland, east towards Corte, we were set up for our first day of proper climbing, up through the Spelunca Gorge. While the main group slogged up the main road, David led a party of us off on a detour on the opposite side of the valley to break us in a little.

When we reached the Col de Vergio (1,477 metres), with a backdrop of the snowcaps of Mount Renoso (2,352 metres), we pulled on extra layers and ate as much as we could as we waited for the stragglers. Then off to a glorious 35km descent, chasing each other down.

Our final day riding was a 110km hike up from Corte, through the Castagniccia and back to Bastia. Pigs and potholes are the prime memories of a long, sweltering session. Whenever we stopped, the landscape seemed to vibrate with heat. It was cooler to keep moving.

Once back at Bastia, we dined like ravenous lords. In the evening bustle of the town, the magic of those shimmering hours toiling up the hillsides was already fading. 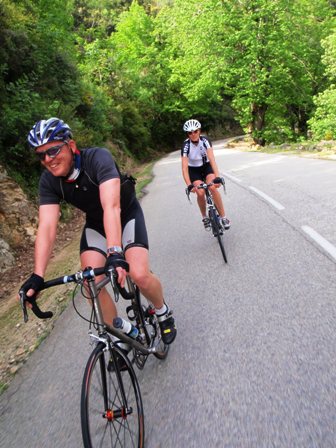 Walney to Whitby and other Coast to Coasts

The Story Behind: Emilia-Romagna, Italy

10 Simple pleasures of a cycling holiday…

The Story Behind: Colombia, Emerald Mountains

Our official guide to the UK’s Coast to...

Our Top 10 Cycling Cafés in the UK

Expert advice: Why Corsica should be on your...