It seemed like a good idea at the time…

Rod Lees and his group of friends from Australia recently completed a bespoke trip visiting the First World War memorials in Northern France and Belgium. Here’s his story from the trip…

Well, somebody must have thought it was a good idea at the time, as they actually tried to carry it out. It was to be just a bit of a diversion to slow down the build up of the enemy into the area around the Somme River on the Western Front during WW1. The Australians were ordered to capture the third line of enemy trenches in a place called Fromelles. It was to be their first action in Europe following the disaster of Gallipoli. 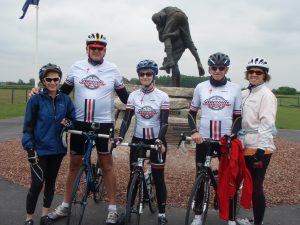 After capturing the first two lines of trenches, they went looking for the third. The problem was that there was no third line and the Aussies were left completely exposed. Somebody stuffed up badly and they were slaughtered.  Before the first day was out the Aussies had lost 5533 killed or wounded. This was twice as many casualties as the landing at Gallipoli.  Definitely not a good idea. Things didn’t improve much for the remainder of the war and the Aussies went home in November 1918 leaving 64,000 dead soldiers behind.  Out of a total Australian population of only 4.5 million at the time, this was a monumental disaster.

What was a good idea was that we see this whole area called the Flanders Fields on our road bikes. I had no desire to sit in the comfort of an air conditioned tour bus with my name tag on, and be forced to take part in sing alongs. These musical sojourns into the past would only be interrupted by brief ventures into the elements to check out some of the 1000 war cemeteries that dot the area. I met one crusty old naval man from Australia who was on such a tour and as he went by he whispered “If they make me sing one more song, I am getting of their F…ING bus”. 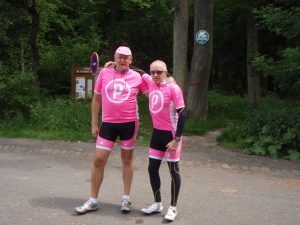 So, I contacted a bike touring company in the UK called “Skedaddle” and they were happy to come on board with a plan. Dave Compston, our sensational guide, and his lovely wife Toni, ventured into the area in February (freezing) and Dave rode most of the route we would take. There are six of us in the group from Australia and together with Dave and Toni, we are travelling in Northern France and Belgium. It is June, and it is still cold. I can’t imagine the conditions in winter and fighting a war.

It also seemed like a good idea at the time, that while we were here, we should try out some of the sections of the classic one day professional bike rides of the area. In this case, I mean the Tour of Flanders and the Paris-Roubaix. After the third section of cobbles and completion of the infamous Trouee d’ Arenberg (aptly known as The Trench), I noticed that with the constant vibration, I had removed a large section of skin from the inside of my left hand.  I wondered at this point as to whether it was such a good idea after all.  We managed to complete a fourth section and then wisely decided to leave the remaining twenty-three sections of cobbles involved in the race for another day. I understand now why the Paris-Roubaix is aptly called “The Hell of the North”. 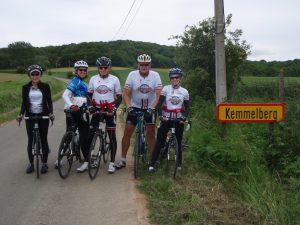 Not to be outdone, we then moved to Ypres in Belgium and had a crack at some more cobbles. This time it was the dreaded Kemmelberg climb, the infamous part of the classic Ghent-Wevelgem race. Mt Kemmel is one of the highest points in Belgium and the site of many battles in WW1. Over 120,000 soldiers lost their lives fighting over this hill. Thankfully today, the only fighting is on a bike and up the final cobbled section at 23% incline.

There is however another hill that we did climb on our bikes that was much more important.  It is a place called Le Hamel.  While it’s not a big hill from a cycling point of view, it is still quite substantial if you were on foot and being shot at. It was the hill that marked the beginning of the end to this terrible conflict and it involved two good ideas.  The first is that Monash, an Australian General, was given command of the Australian forces for the first time. And the second was that he actually developed a plan with an emphasis on saving as many Australian lives as possible. It worked and the battle was over in 93 minutes.

On our final day we rode about 100k, took in the last of the battle fields around Ypres and then tackled the Kemmelberg climb for one last time. Toni and Dave presented us with a wreath that we laid at Menin Gate as part of the nightly ceremony in memory of the fallen.  Apart from the four year break during WW2, this ceremony and the playing of the haunting “Last Post” has been performed at Menin Gate every evening since 1929. It was very moving. 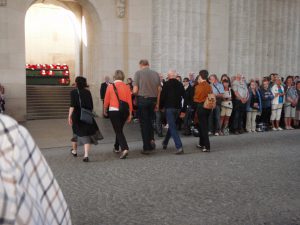 In all, it has been estimated that 17 million (10 million military and 7 million civilian) lives were lost during WW1. What a waste. As one historian noted – “The one lesson we learn from history is that we learn nothing from history”. This undertaking was definitely not a good idea.

It was however a good idea to come on this adventure and it will go down as one of the greatest experiences of my life. My thanks go to “Skedaddle”, for believing in the idea, Dave and Toni for making it happen and Martin, Betti, Ken, Erica and the lovely Karyn for their wonderful company.

Shakespeare on a Bike!

My Skedaddle Story: Grumpy Guide to the Loire...

9 things you’ll only understand if you’ve been...

Expert advice: Why Corsica should be on your...

Customer Story: We’ll get you to Nice!