Our festive departures offer a great opportunity for cyclists to get out on their bikes and celebrate this special holiday season in style! One such Skedaddler, Mike Heath, decided our Costa Rican adventure Volcanes Y Playas was the tour for him to celebrate the start of 2016. Having packed his bags and his flip flops he headed for the sun, sand and sea! Here’s how he got on…

The last day of 2015 started with a swim in the outdoor pool that was surrounded by luxurious tropical plants and shrubs. The only disturbances from the early morning calm were the howler monkeys making their way around the perimeter of the hotel grounds and the thud of an iguana falling out of a tree. Quite a normal start to any day really. 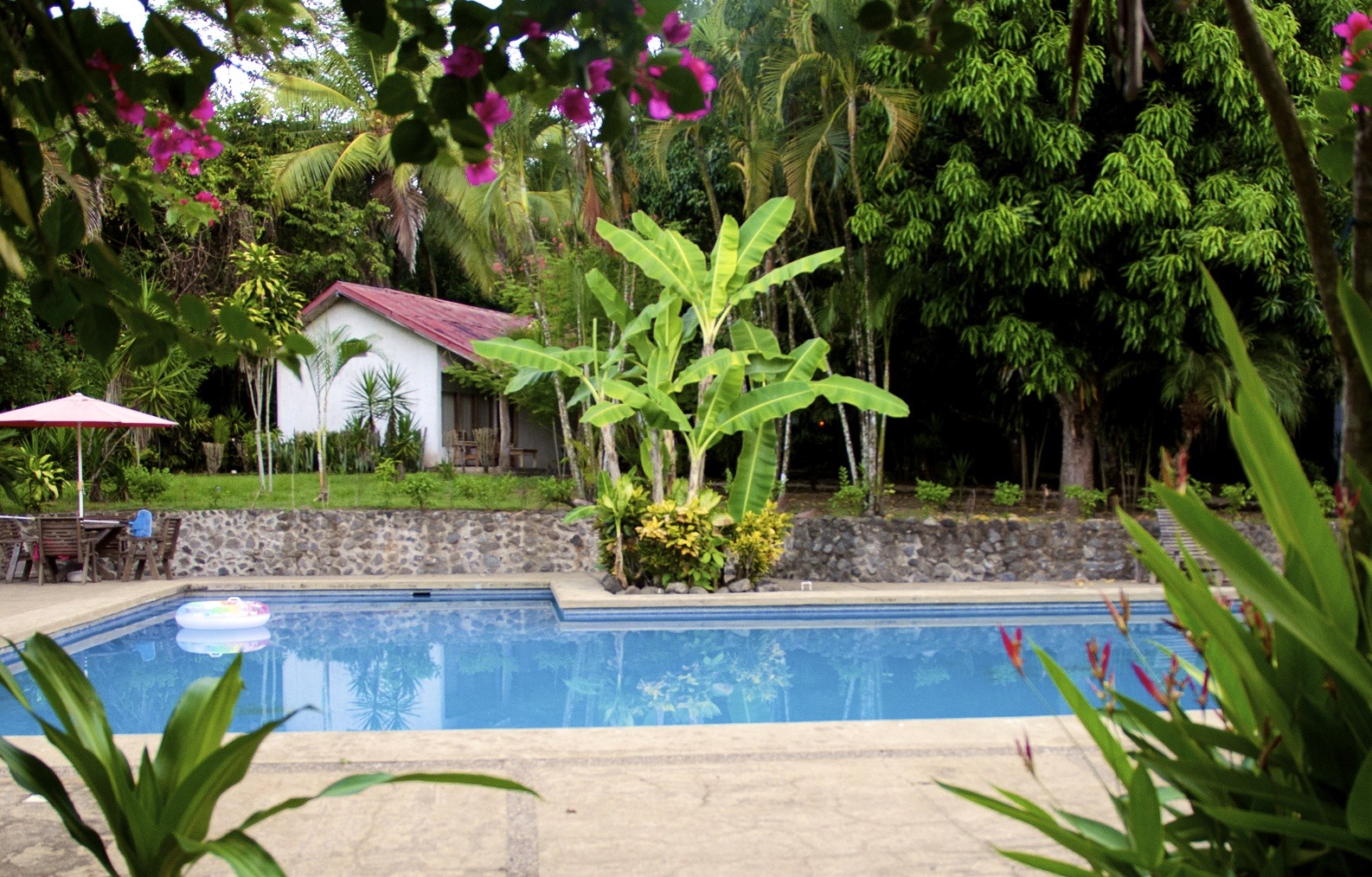 Breakfast was a relaxed affair of rice & beans, not beans & rice which is a totally different dish altogether(!), large plates of melon, papaya & banana and fresh Costa Rican coffee.

The bikes were retrieved and we made our way to Coyote Beach for a ride in what can only be described as paradise. The 8 mile long ride was paricularly special as it was a totally new experience to me with palm trees to the left, firm grippy sand to the centre and the breaking waves of the Pacific Ocean to the right. 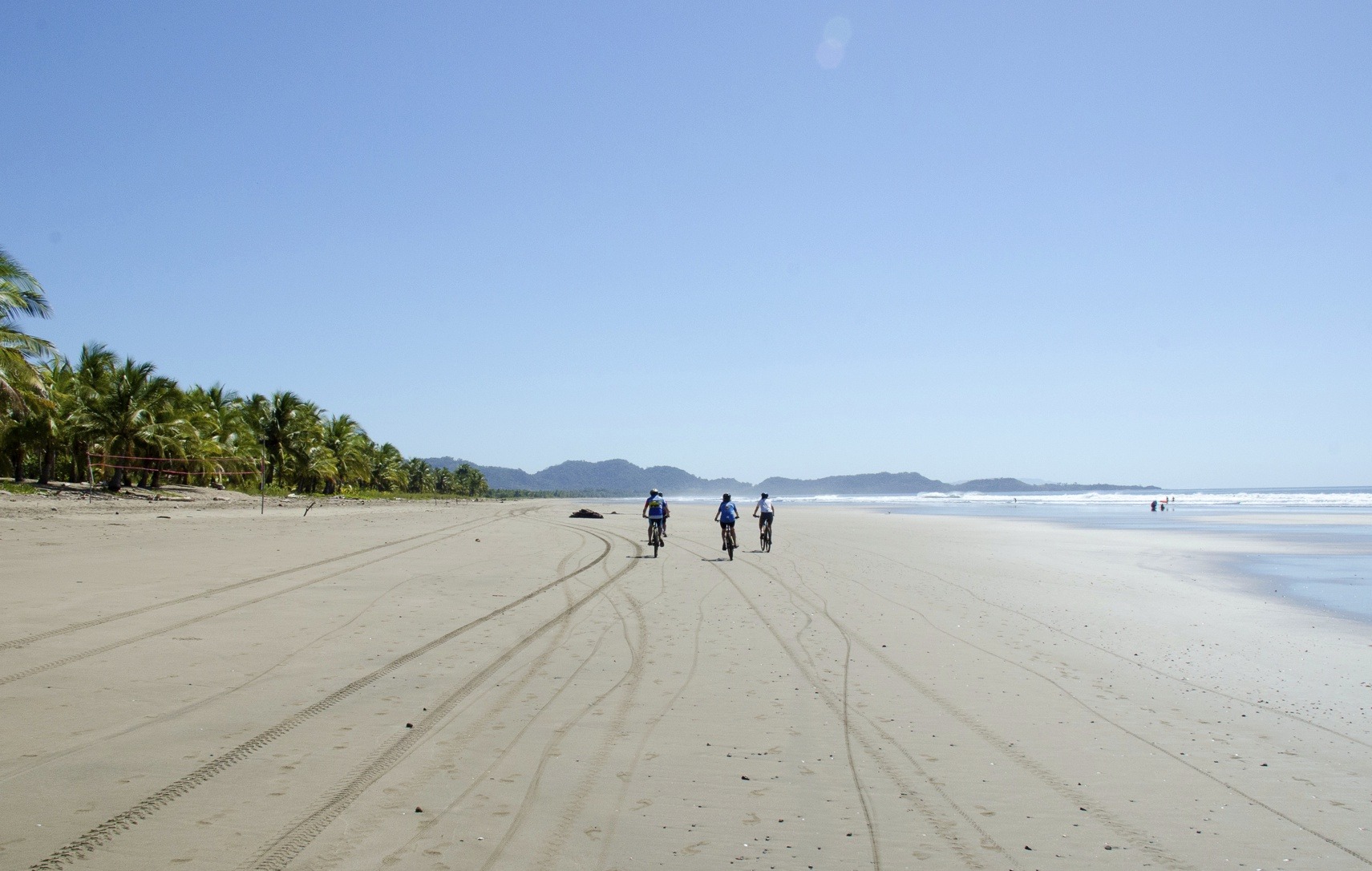 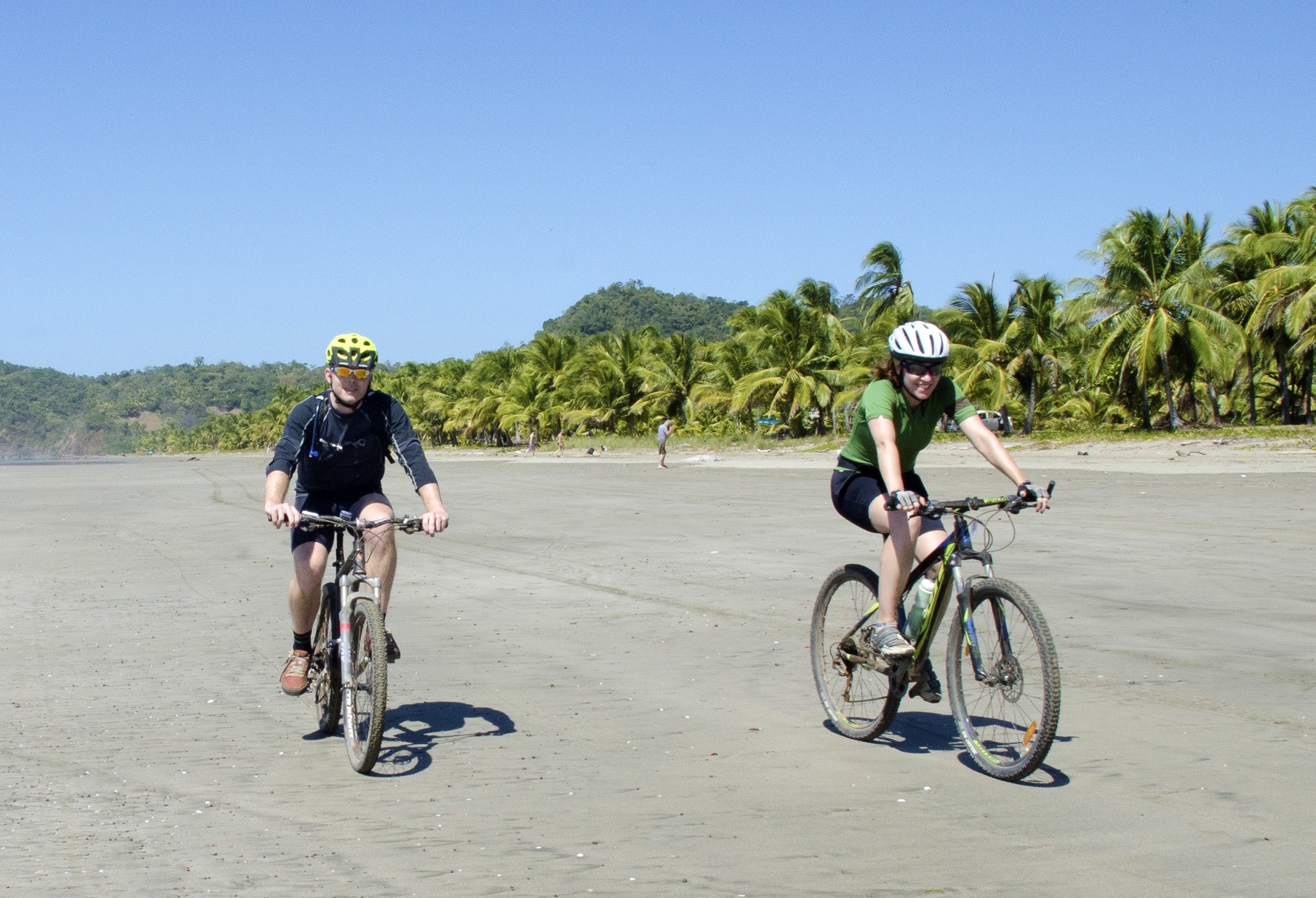 There were plenty of pauses to the riding in the quest for “Sand Dollars” and to graffiti the pristine sand with circular tyre tread patterns and all the names of the people on the trip. Star jumps and planking were the cause of most energy to be expended in the entire ride.

After about an hour of riding we departed the beach and in the shade of coconut palms we feasted on fresh pineapple and melon. Pineapples bought in the UK bear no resemblance to the Costa Rican ones, both in terms of size and natural sweetness. What better way to spend a New Year’s Eve morning? 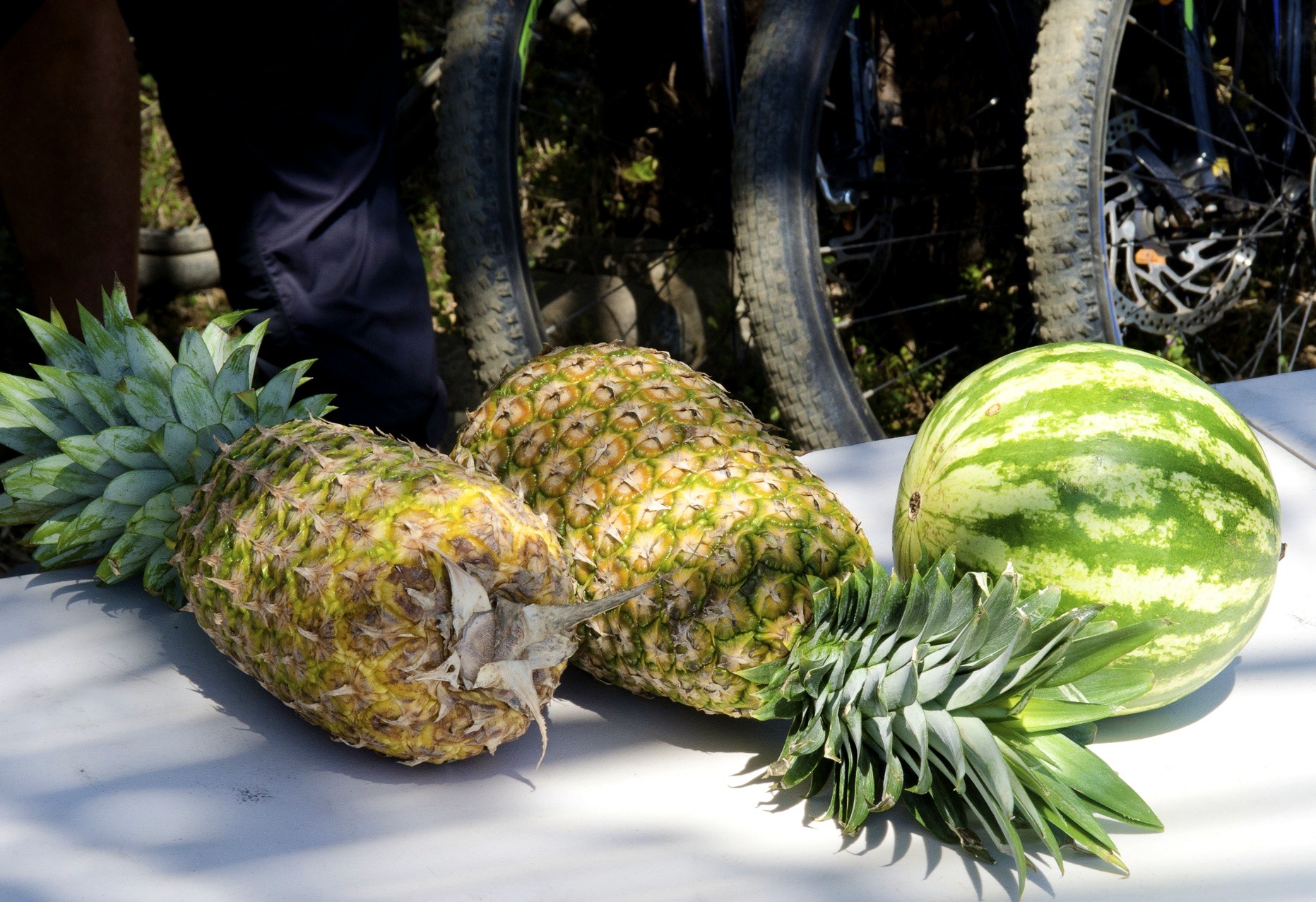 Lunch was taken locally in a Soda cafe before the ride back to Noah’s Ark, the hotel set in the grounds of a tropical paradise. There was more time to relax in the pool and cool down from the 34 degree heat, spotting more wildlife in the grounds.

It was all too quickly time to head back down to the beach for the last sunset of 2015 sat on driftwood logs clasping a glass of chilled Cava. The sunset was absolutely stunning, casting its golden rays across the breaking surf and sandy beach. 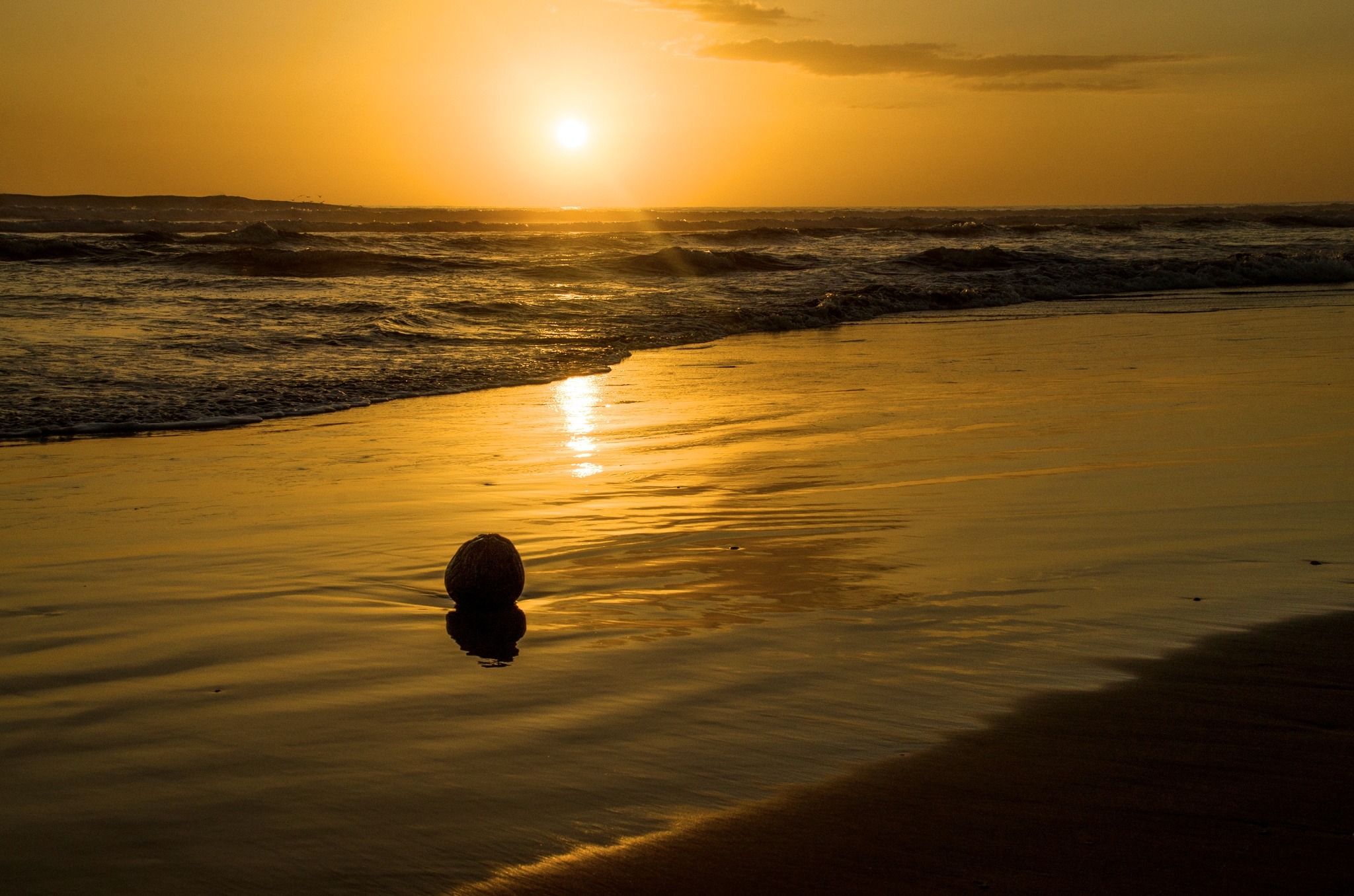 As evening approached we had a relaxed meal in a typical Costa Rican restaurant, then it was time to party with the locals in a bar by the beach and see 2016 in style. Fireworks topped the evening’s celebrations with several displays going off all along the edge of the Coyote Beach that we had cycled along earlier the day. Chinese paper lanterns struggled to rise in the warm morning air but eventually rose into the dark night sky.

Treat the kids to the Tyrolean