We’ve been raving about the beautiful Italian island of Sardinia for quite some time, so it’s always great to hear our Skedaddler’s raving about this destination upon their return from a holiday here! Pam Fogg was so impressed with the mediterranean delights on offer during her Island Flavours holiday, she sent us in this fantastic entry highlighting the culinary treats you can enjoy.

‘Forget ‘an army marches on its stomach’, think instead ‘a touring cyclist is obsessed with the next meal’. And it’s not all about supplying energy, it’s about boosting morale. When the last hill is never-ending and the legs are in lactic-acid melt down, the brain is free to fantasise about the next culinary reward waiting ahead. The miles and the pain fall-away! 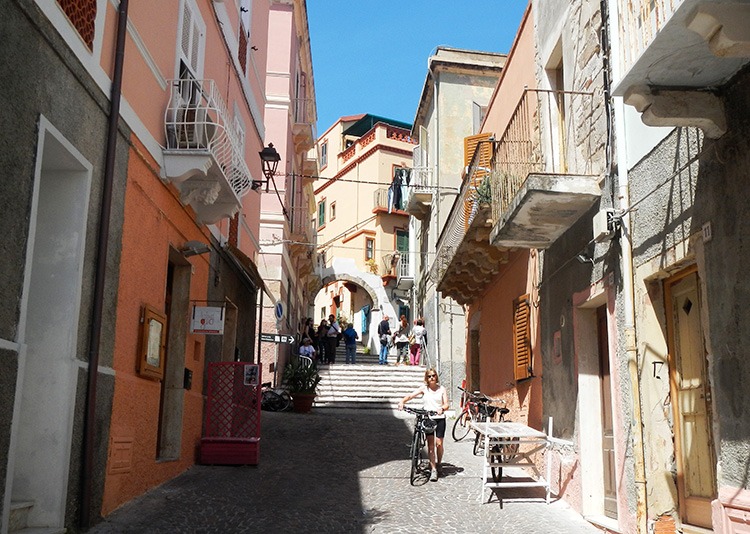 Weirdly, when we booked our last minute Sardinian trip, we hadn’t noticed that it was billed as ‘Island Flavours’. We just chose it because it looked like a varied route with lots of beaches and islands, and more downhills than ups. But on our first evening, as we sat at the scrubbed wooden table in Sa Muredda in Villanovaforru, and our cheery host Pasquale blazed a culinary trail back and forth from his kitchen to us, with ever-more taste-bud watering dishes, the realisation dawned – we were in Sardinia TO EAT. 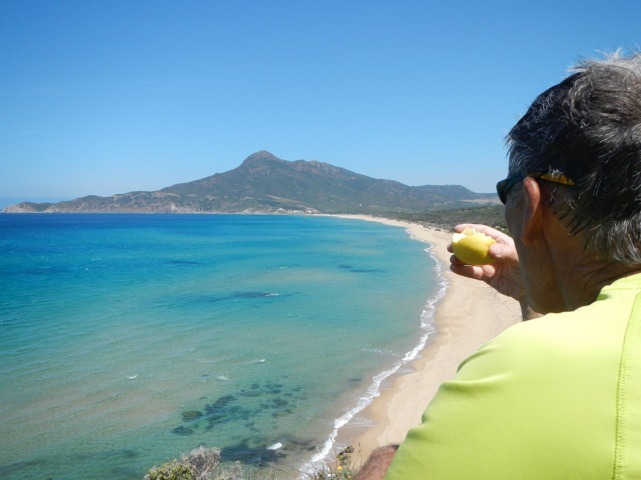 We shared our first meal with another pair of Skedaddlers, Penny and Michael, who were on the ‘coast to coast’. I had told Pasquale that I was vegetarian. They too were veggies – strength in numbers is always comforting. But Pasquale wasn’t in the least bit fazed. Virtually everything he produced was home-grown or locally sourced; fresh, pickled, or frozen. Tomatoes from his allotment, sun-dried and drizzled with his own olive oil, sweeter than any I’ve tasted before. Delicate pickled asparagus and peppers with a huge bowl of feather-light ravioli. Oh and the Sardinian dessert- an individual ravioli stuffed with silky ricotta, orange zest and local saffron.  Rounded off with a digestivo liqueur -home-made limoncello –unlike anything shop-bought or masquerading under the same name- vibrant, sherbety, more lemony than a lemon from Planet Lemon, the embodiment of a taste-sensation!

Pasquale prepared and cooked alone, no music, no radio no TV, just him, singing contentedly to himself in his kitchen.

To our stomach’s delight, we were to be in Sa Muredda for two nights. There was another couple staying; regular visitors returning every year in April to photograph the orchids (that’s another story –the wildflowers throughout the trip were glorious). We fell into conversation. As soon as Pasquale heard that they were also into fungi, he rushed to his freezer and produced handfuls of whole, frozen Porcino-like beauties that he had picked the previous autumn in woodlands we’d be passing through there the next day. 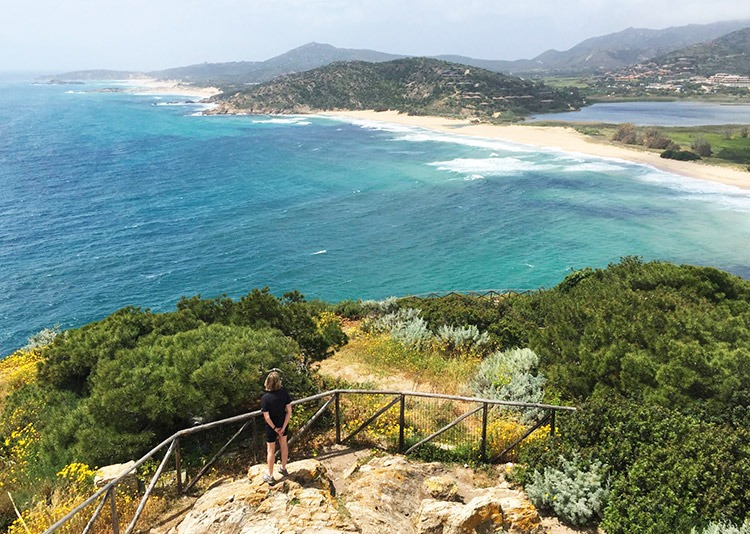 The woodlands turned out to be precious cork oaks, their barks harvested for wine stoppers. They surround Marco’s farm in the hills above Arbus. Slithers of home-produced piquant Pecorino cheese, olives, home-cured sausages, proscuitto and salami was the anti-pasta that evening.

Then Nebida, perched on the side of a steep hillside, over-looking that fabled, blue, blue, electric blue sea. When we arrived, our host Gabriella and assistants were standing outside in the late afternoon sun preparing a mountain of artichokes. I pointed and made scrummy noises. 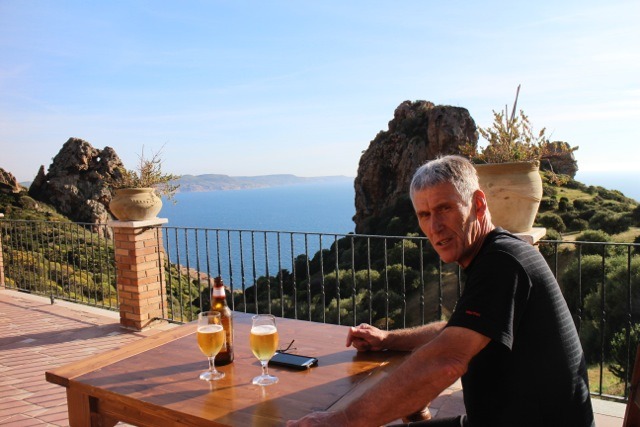 I told Gabriella that I’m a veggie . No problem. She said she’d get the chef to prepare me a frittata and Tim could have fish.

“A vegetarian that eats fish?” she puzzled, “that’s a funny vegetarian!”

I let it pass!

The chef produced Pana carasau, the poppadom-like bread drizzled with warm olive oil and rosemary, and a platter of pasta with those artichoke hearts they had been preparing earlier, sufficient to feed 20 (there was 2 of us), followed by fresh Spigola . We had to look it up in our dictionary – Sea bass, grilled with torn bay leaves, served with toasty little chunks of fresh herby-strewn potato. Wafer-thin slices of courgette and aubergine fried till crispy. Followed by the essential digestif – home-made Mirto, a delicious maceration of the berries and leaves of the Myrtle. Throughout the meal, chef kept popping his head through the hatch to check that we were enjoying his creations. Thumbs up from us, the universal language of approval.

The next day, by a stroke of culinary serendipity, our visit to San Pietro island  coincided with the island’s Tabarkan Cous Cous Festival. We couldn’t understand why the ferries were packed until we wheeled our bikes through Carloforte. The narrow bustling streets were lined with stalls selling nose-assaulting pungent cheeses, salamis, warm sweet sticky delicious nougat in little pokes of edible paper. And every available seat occupied by diners with trays of cous cous – a celebration of the island’s ancient links with Tunisia. The town was given over to a celebration of food. 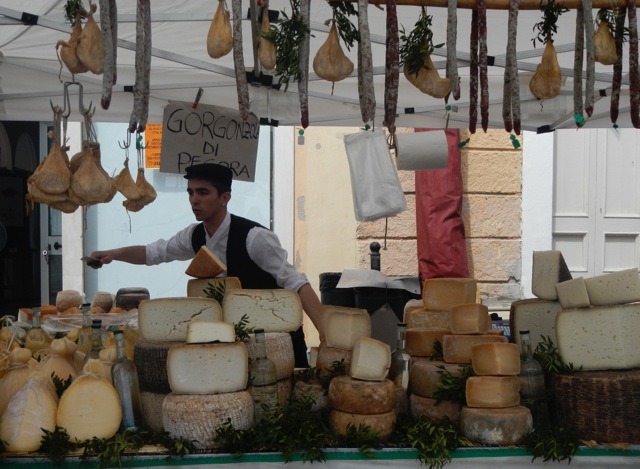 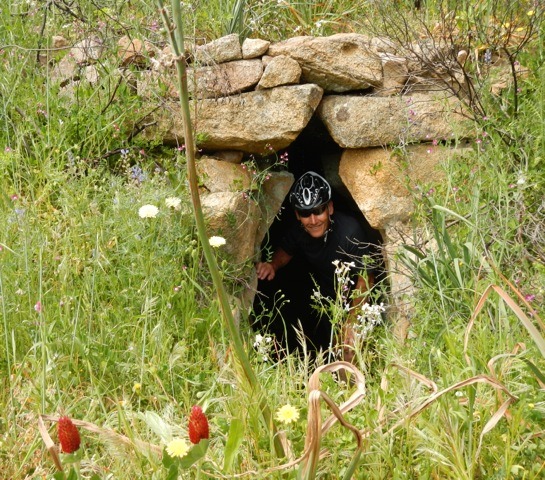 And the grand food-finale?  The home-made gelato in Pula…….. 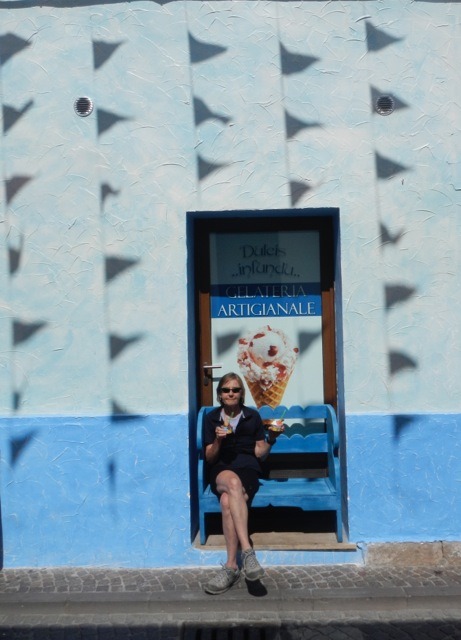 Feeling inspired? Find out more about our leisure cycling holiday in Sardinia.

New to Road Cycling? Fear not!