Summary Itinerary Gallery The Cycling Dates & Prices The Essentials
Search Holidays
BOOK NOW
View Reviews
1
Hadrian’s Wall country is quite simply a cyclist’s paradise with its stunning landscapes and sense of history, from the bloody border feuds of the Border Reivers to being home to Europe’s largest surviving Roman monument, Hadrian’s Wall. Built in AD122 under the orders of Emperor Hadrian, the wall stretched for 73 miles between the tidal Tyne at Newcastle in the east to the Solway Firth in the west, and was successful in controlling the northern frontier of the Roman Empire. In 1987 Hadrian’s Wall was designated a World Heritage Site by UNESCO and is the most protected landscape anywhere in the United Kingdom and ranks alongside the pyramids in Egypt and the Taj Mahal in India.
Utilizing the National Cycle Network, we cycle along the northern boundary of the Roman Empire, starting and finishing at either end of Hadrian’s Wall. This wonderfully mellow cycling break follows in the footsteps of Roman soldiers, allowing you to experience some of the rich heritage that Cumbria and Northumberland have to offer, from cycling in open hill country, through peaceful river valleys and finishing at the North Sea in Tynemouth. The route passes through some of the most beautiful parts of England and skirts a number of fascinating Roman sites including Birdoswald Fort, Walltown Quarry, Great Chesters Fort and Vindolanda.
This self-guided trip is for a minimum of 2 people and accommodation, transfers, luggage transfers and emergency back up are all included. We also provide detailed route notes and maps to enable you to do the route self-guided. Nothing could be simpler!
Looking for a UK family cycling tour on quiet roads, traffic free paths and National Cycle Network routes? Then Hadrian's Cycleway is the tour for you. This trip can also be done over 4 days and also as a 4 day supported trip.

This holiday was an opportunity to spend time with our loved ones and have a fabulous adventure on our island! We will definitely pursue another holiday similar to this.

Getting to Newcastle is easy. If you are planning to arrive by air, there is an airport at Newcastle with direct services to Newcastle Central train station. For those arriving by car, you will be able to leave your vehicle at your accommodation, or if the train is your preferred transport mode, you can either take a taxi from the station to your accommodation or it is just a short 10-15 minute walk away. 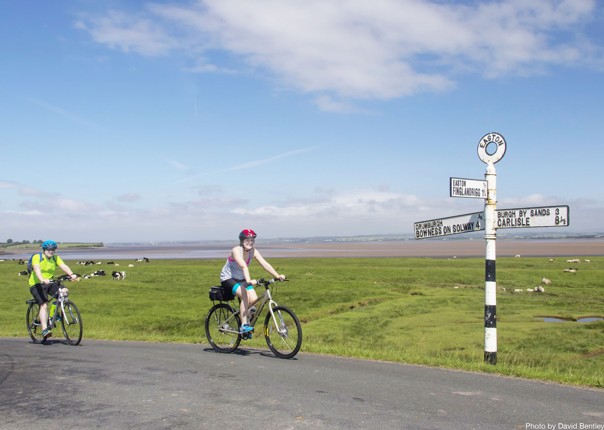 After a hearty breakfast, you will be met by our Skedaddle representative at your accommodation in Newcastle who will provide you with your hire bikes (if hiring), an Information Pack including route notes, maps and additional information for your trip. They will then transfer you to Bowness-on-Solway to begin your family cycling adventure. Bowness-on-Solway is the beginning of the Hadrian’s Wall National Trail, and the village sits on the stunning Solway Firth (an Area of Outstanding Natural Beauty). The views of Scotland from here are simply breathtaking. The area is also a haven for wildlife, so keep an eye out for wildfowl during this first part of the trip. Our first day’s riding is a gentle introduction to the trip with a flat ride by the banks of the Solway Firth before skirting Carlisle. This thriving regional city is well worth a visit if time allows; it showcases some of the area’s historic treasures in the Tullie House Museum and Art Gallery, and boasting Carlisle Castle, still welcoming visitors since Mary Queen of Scots and Bonnie Prince Charlie’s Jacobites.

Leaving the bustling city of Carlisle behind, you will cycle along a section that follows the picturesque river Eden and with photo opportunities at every turn, make sure you have your camera ready! Gently undulating you will carry on passing through the village of Warwick Bridge before arriving at your accommodation in Brampton.

Your cycling today passes through the pretty village of Lanercost with its hauntingly beautiful priory which was founded in 1165 by Augustinian canons. with your first real uphill section of the ride….who in the family will be first up the hill? You then go directly past Birdoswald Roman Fort which stands high above a bend in the River Irthing, in one of the most picturesque settings on Hadrian’s Wall. A Roman fort, turret and milecastle can all be seen on this excellent stretch of the Wall. With probably the best preserved defences of any Wall fort and best of all you’ll be cycling right alongside it! This was an important base for some 1,000 Roman soldiers, succeeding an earlier fort of turf and timber. Passing the ruins of the 14th century Thirwall Castle, (built out of stone plundered from the wall), you will cross the Pennine watershed and gradually climb out of Greenhead before a welcome descent begins into the South Tyne Valley down into Haltwhistle, which is a great place to have a cuppa and sneaky piece of cake, before heading on to Bardon Mill. Once here you head back up the South Tyne Valley to a summit at Smith’s Shield, before arriving at your accommodation at Twice Brewed. 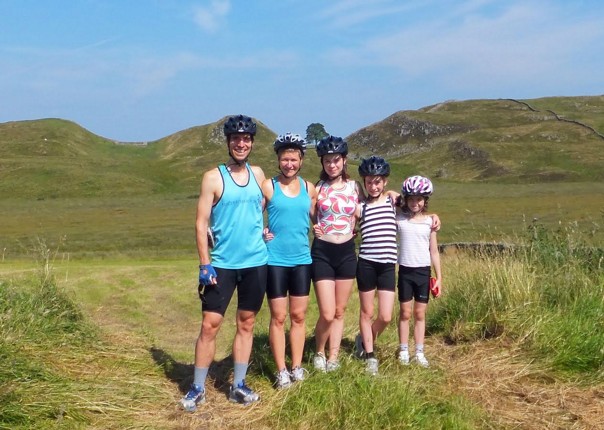 After breakfast you start your day with an exhilarating descent to Vindolanda, a Roman frontier military and civilian site, and a must for those in search of Roman history and culture. Dating back to just before the Wall was constructed, the 2,000 writing tablets (discovered just a mere 30 years ago) form the earliest archive of written material in British history and are matched by similar tablets from the Eastern Frontier; it’s a sort of 360-degree view of empire life. A slight detour towards Housesteads provides outstanding views over Vindolanda and classic Hadrian’s Wall scenery. A cheeky climb takes you to Crindledykes, the highest point of the route (263 metres above sea level). You then drop towards Fourstones before passing through the market town of Hexham, towards the garrison town of Corbridge. 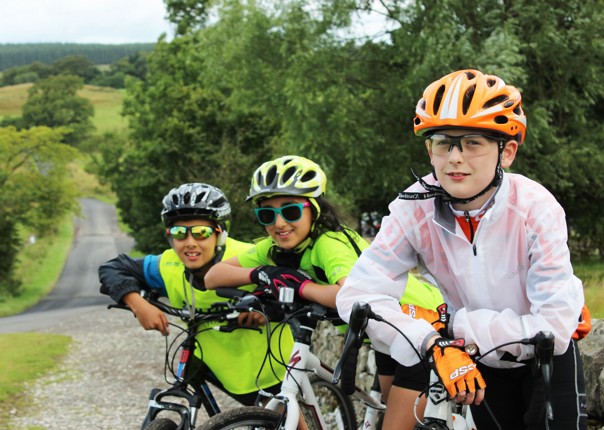 After breakfast you might wish to check out Corbridge’s Roman site. It’s a more leisurely start today as all the major climbs are now behind you! On leaving Corbridge there is a relatively steep initial section, but this is soon forgotten as you whiz down into the valley floor and cycle towards Prudhoe.

Your scenic route will see you passing through the pretty villages of Ovingham and Wylam, and passing Robert Stephenson’s Cottage – it’s a small cottage so don’t rocket past!! After criss-crossing the River Tyne, continue along an old wagonway towards Newburn following the banks of the Tyne. 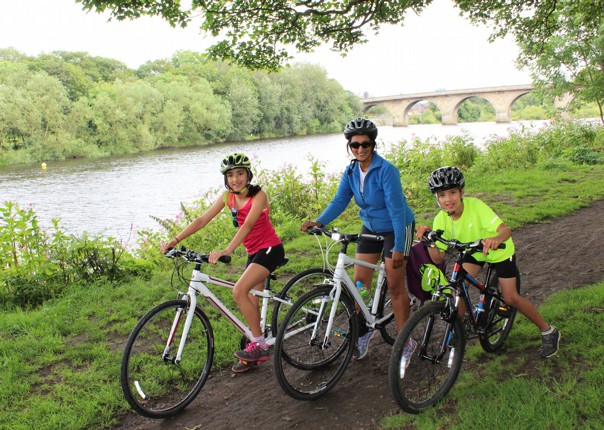 All the ups and downs are now behind you and you can take your time cycling on your final day of cycling.

As you get closer to Newcastle it’s time to count the bridges along the River Tyne. This includes the “blinking eye” Millennium Bridge which you will cycle past, and spans the river from Newcastle on the North bank to Gateshead on the South bank where the Baltic Centre for Contemporary Arts and Sage concert hall dominate the skyline. The Cycle Hub is situated on the route just after this and is the perfect place for a well earned cuppa and a slice of delicious hub-made cake. It’s dedicated to the cyclist and also the home of Saddle Skedaddle so why not come and say hello?

Not far to the end now as you head into the heart of the shipbuilding area of the Tyne. On passing Wallsend – literally the “Wall’s end“, keep an eye out for Segedunum Roman Fort Museum if you fancy a little more Roman history to end your Hadrian’s Wall experience. Look out for the viewing platform in the shape of a Roman Centurian’s helmet!! Continuing along close to the river we soon reach the Fish Quays of North Shields, where you’ll find a bustling little harbour and be able to sample some of the finest fish and chips in the North East. You are now at the mouth of the Tyne and a few more pedal turns lead to your final destination, Tynemouth. Time to celebrate your achievement – ice creams all round? We will then meet you in Tynemouth and whisk you back to Newcastle.

Hadrian’s Cycleway runs mainly on country lanes and quiet roads, interspersed with sections of traffic-free path, promenade and riverside path. The coastal sections at either end of the route are relatively flat, but there are a few steep, short hills in the central section.

The majority of the route is paved, with a couple of short sections on hard-packed gravel. A hybrid bike is recommended, but a road bike fitted with touring tyres is also suitable when ridden with a little extra care.

Aspects of both our grade 1 and 2 trips

Trips that are graded as a 1-2, will have aspects of both our grade 1 and grade 2 trips. These tours are still suitable for those looking for an accessible cycling holiday with manageable daily distances, along predominately flat terrain, however there will be some days / sections where we’d expect you to be up for a slightly cheeky challenge. It might be that the distances are a little longer on some days or that the terrain is slightly more undulating, but the rides are still relaxed and manageable for families who are generally fit and healthy.

We LOVED it! We really enjoyed the cycling, as a family holiday it’s really brilliant.

The season prices below are applicable for all start dates between and inclusive of the stated dates.

With its excellent rail and air connections getting to Newcastle is easy. Newcastle has an airport, although transatlantic options are limited and most routes will come via London, or if travelling by train we ask that you arrive into and depart from Newcastle train station.

Please contact us for more detailed information on the specific schedules that we recommend for your holiday and check with us before booking your travel so that we can ensure it fits with the trip schedule.

If you would like to rent a bike we have both hybrid and electric bikes available. The hybrid bikes are generally Giant Roam or Liv Rove with a large 30 speed gear range, semi-slick tyres and a relaxed riding position. Our electric bikes are generally Giant Entour 2 E+2 Disc pedal assist bikes with 300Wh batteries. Both models of bikes come with either a standard cross bar or step through frame. Please let us know if you have a preference

Excellent support from Skedaddle (even dropping extra spare inner tubes at the hotel the next night at no charge, just in case), fantastic helpfulness. 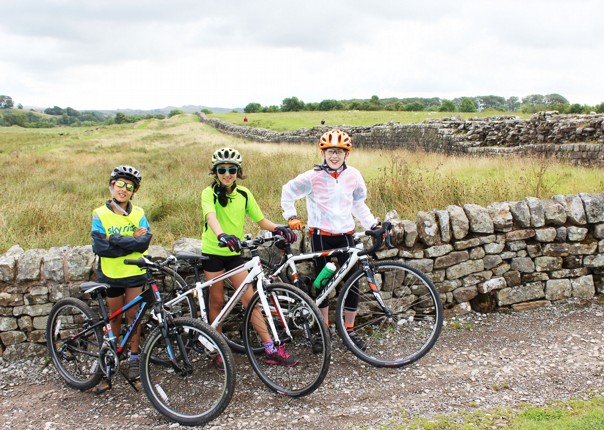 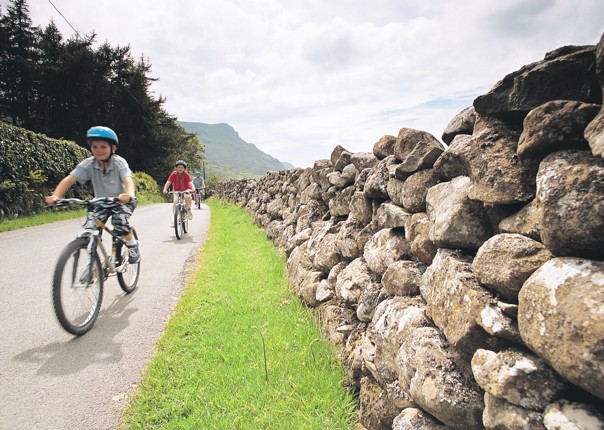 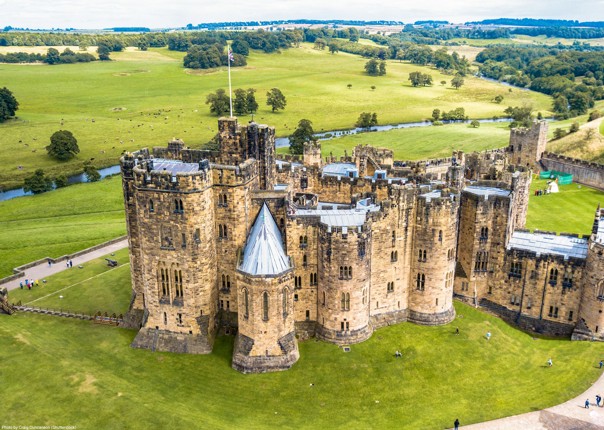