$1,800 P.P.
Summary Itinerary Gallery The Cycling Dates & Prices The Essentials
Search Holidays
BOOK NOW
View Reviews
1
Our self-guided cycling tour in Emilia-Romagna will take you from the splendid classical musical town of Cremona in the north to bustling Bologna in the south, all while cycling on quiet country roads and cycle paths. All along the route you will enjoy panoramic views of the northern Italian plain, quaint historic village and town centres, Renaissance art and architecture and delicious food and wines.
Starting from Cremona you will follow the River Po to Busseto, the home town of Giuseppe Verdi and then you'll slowly make your way to Parma, a cultural and culinary gem and the home town of Parma ham. Making your way further south from Parma to Reggio Emilia you will pass fortified hamlets and imposing castles.
The second part of your journey will take you to Modena and Bologna, both important towns boasting splendid historic centres, and both featuring on the UNESCO world-heritage list. Here you will cycle through lush countryside and visit towns and villages that fiercely guard the recipes of some of Italy’s most well-known foods (like Aceto di Balsamico!).
We're sure that by the end of this cycling tour you will not only have admired some of Italy’s most marvelous cultural sights and learned about its history, but having sojourned in the heartland of Italian cuisine, you'll also have tasted some of the country's most famous products: this is where Parma ham, Parmesan and balsamic vinegar are all produced so you'll be spoilt for choice!

On arrival into Milan Bergamo airport, we’ll transfer you to Cremona (approx 1.5 hour drive). Time permitting, we recommend visiting the Museo del Stradivario – Cremona is the hometown of the Stradivarious violin and music is very much at the heart of the town. 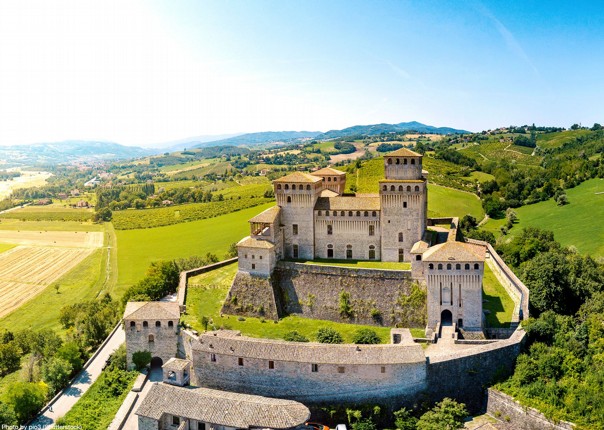 This morning you will receive your welcome meeting and also your bike fitting (if renting). Now is the perfect time to ask any questions to your local representative.

Leaving Cremona, you’ll follow the River Po bike path heading into the open countryside. You’ll pass cultivated fields and small farms, arriving in the hamlet of Le Roncole where Giuseppe Verdi was born and spent his first years, starting his long and illustrious musical career by playing the village organ.

A short ride will take you to the quiet town of Busseto, home to the Teatro Verdi and the Giuseppe Verdi National Museum which merits a visit.

Heading back towards the Po River, you’ll continue riding through rural countryside, through a region renowned for the production of the Culatello di Zibello, a type of meat known as the King of Dried Meats, as well as the classic Parma Ham. Meandering along the cycle route you’ll reach Colorno. Known as the Versailles of Parma, the Reggia di Colorno is an 18th century ducal palace well worth a visit. True to its location close to Parma, it houses the headquarters of ALMA, the International School of Italian cuisine.

The town of Parma itself is yet another Italian cultural (and culinary!) gem. Make sure to find the time to walk around the historic centre and its piazzas before sitting down for dinner.

Today you’ll ride closer to the hills and into the Val Parma, passing several fortified hill top settlements and castles on your way to Reggio Emilia. Torrechiara is the most imposing of them all, with its 15th century castle overlooking the valley. This fairytale castle is not to be missed, enveloped in a romantic story between the count who built it and his lover.

Cycling on through the Parma countryside you’ll make your way to today’s overnight stop, Reggio Emilia.

From Reggio Emilia today you will cycle on quiet country lanes to Modena.

Along the way you will pass through the towns of Correggio and Carpi both of which preserve several splendid churches and civilian palaces, as well as offering plenty of opportunities for a cappuccino or gelato break.

Your destination today is Modena, a modern bustling town dating back to the Roman era. Here make sure to visit the Duomo, the Torre Civica and the Piazza Grande, all of which made it onto the UNESCO list of World Heritage sites in 1997.

This morning you can opt to stay in Modena to explore its numerous sights or enjoy another day on the bike.

If opting to ride, from Modena you’ll head south along the Panaro River in the direction of Spilamberto, famous as the regional center for Aceto Balsamico production. Food buffs here definitely need to visit the Museo dell’Aceto Balsamico Tradizionale.

You’ll then continue to Vignola where in the late spring you can refresh yourself with the locally produced black cherry of Vignola (moretta di Vignola). On reaching the village of Marano sul Panaro you’ll start heading north again cycling back to Modena through slightly hillier countryside. 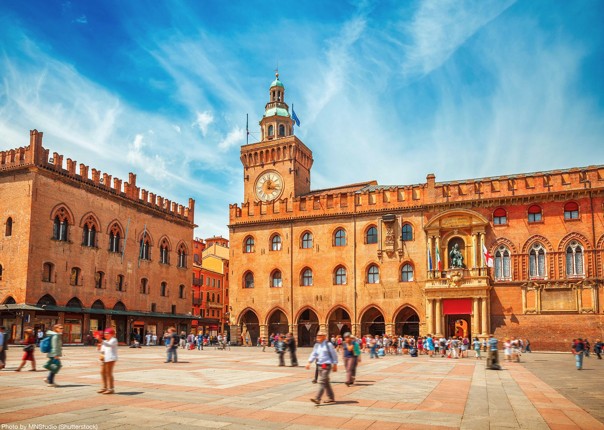 Your last cycling day will take you from Modena to the region’s capital; Bologna. Sticking predominantly to quiet, secondary, country roads you will soon reach the outskirts of the town where you’ll pass through Borgo Panigale, home to the Moto Ducati factory.

The town of Bologna is the seat to the oldest university of the western world and boasts an extensive historic center. Symbols of the town are its shady porticoes and the twin towers Torre degli Asinelli and Torre della Garisenda. Make sure you also visit the splendid Piazza Maggiore with the Basilica di San Petronio. Bologna being famous for its local cuisine as well, you won’t be disappointed when going out for dinner!

Arrivederci! Time to head to the airport for flights home (approx. 30 min transfer to airport).

You’ll be riding predominantly on quiet, country roads shared with vehicle traffic (approx. 60% of the route) – the remaining 40% will be on cycle paths (some mixed use, i.e. shared with pedestrians) or on cycle lanes.

Day 4 will pose the biggest challenge being the longest in distance and in terms of climbing, but you can take it at your own pace.

There are some short sections throughout the week on hard-packed gravel tracks and on gravel / dirt roads so we recommend hybrid bikes for this tour. A road bike would suffice if happy to push over these short sections. 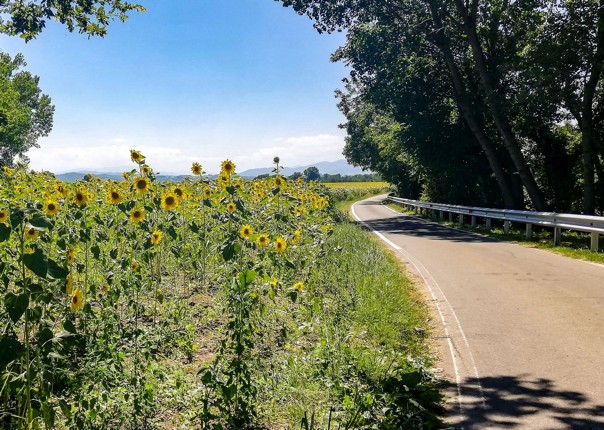 Aspects of both our grade 2 and 3 trips

Trips that are graded as a 2-3, will have aspects of both our grade 2 and 3 rides. These tours are still suitable for those perhaps who have recently got into cycling, and offer an array of accessible, cycle friendly routes, cycle paths and quiet roads, however there will be some days / sections where you may have to tackle some ups and downs, the occasional steeper climb and perhaps some varying terrain (forest tracks, gravel paths etc). Suitable for those with a decent level of physical fitness, looking for some leisurely rides with occasional (achievable!) challenges along the way.

Daily departures available. The season prices below are per person and are applicable for all start dates between and inclusive of the stated dates.

D) Access to the Skedaddle App for holiday information and navigation

A) Bike rental (available if required)

This tour starts in Cremona and finishes in Bologna.

Airport transfers on your arrival day are included in the cost of your tour. We ask that you fly into Milan Bergamo (BGY). Please aim to arrive between 09.00 and 16.00.

At the end of the tour, the most convenient airport is Bologna (BLQ). We ask that you make your own way to the airport. We can help organise a transfer (price on request), or you can make your way using public transport.

If you’d prefer to fly into Verona (VRN) we can organise this for you for an additional $45.

You’ll stay in comfortable 3 star hotels all with en-suite facilities which have been carefully selected for their location, local cuisine and service.

If you don’t own a suitable bike or would prefer to avoid bringing your own we have bikes available to rent.

These bikes are typically 21 speed aluminium city bikes (as above), with both unisex frames and frames with a cross bar available (usually height dependent – please specify at the time of booking if you have a preference). We also have e-bikes available.

We can provide a helmet locally on request, please let us know if you’d like to rent one when you make your booking.

Rental bikes will be provided with a pannier rack and 1 bag, a phone mount, a tool kit, a spare inner tube, a bike lock and a bike pump.

The Story Behind: Emilia-Romagna

Do you love to indulge in local delicacies? Read about this Italian gem...

We loved going into the medieval villages!

Both guides couldn’t have been more helpful with everything. First time with an electric bike and we loved the bikes! Trouble is it will be hard to go back to an ordinary bike! 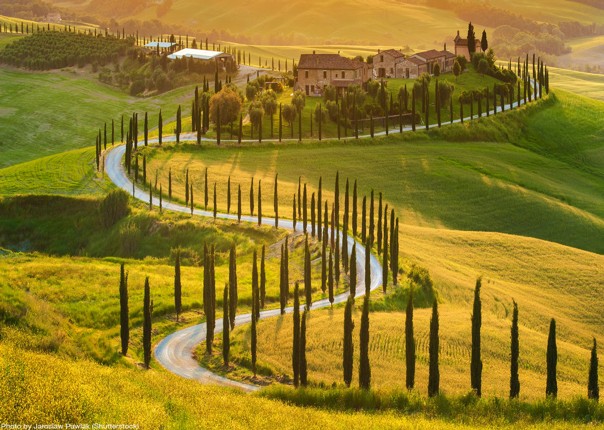 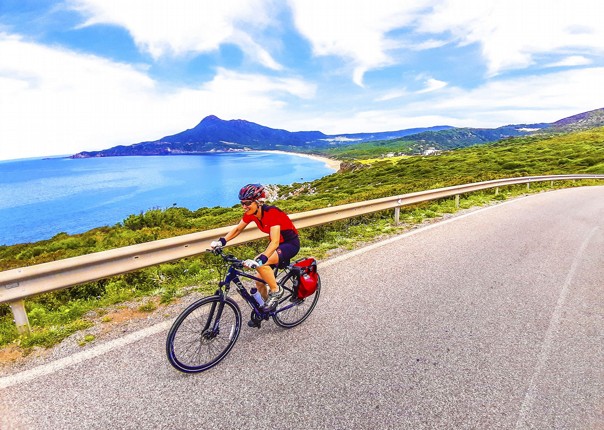